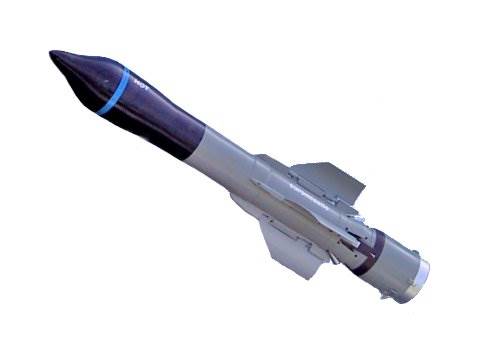 The HOT is a late Cold War era anti-tank missile of French/German origin. It was developed in the early and mid 1970's to replace the SS.11 missile. The name HOT stands for "Haut subsonique, Optiquement téléguidé, Tiré d'un tube", this translates to "high subsonic, optically guided, tube launched". The performance is comparable to the American TOW missile and Soviet Konkurs (AT-5) missile.

The HOT missile is a wire guided anti-tank missile that is similar in general layout to the contemporary American TOW, Soviet Konkurs and British Swingfire. The HOT has a shaped HEAT warhead in the nose which is followed by a guidance section and solid fuel rocket with booster section for inititial velocity. The missile is carried in a launch canister and the four wings at the rear of the missile are folded within the tube. The HOT uses SACLOS guidance with a 4.3 km command wire extending from the missile.

The HOT is a powerful anti-tank missile with good penetration characteristics. The HOT-1 HEAT warhead penetrates 800 mm RHA, the HOT-2 does 900 mm and the tandem HEAT warhead on the HOT-3 penetrates 1.250 mm behind ERA. It is also effective against bunkers and light vehicles, but of limited use against infantry in the open. The maximum range is 4 km and the flight speed is about 850 km/h. The SACLOS guidance results in good accuracy, even against moving targets.

The HOT is used on a wide range of vehicles and helicopters. The HOT was first employed on dedicated anti-tank vehicles such as the German Jaguar and French VAB-VCAC with Mephisto turret. Turrets such as the Mephisto, UTM-800 and Lancelot have been mounted on various wheeled and tracked vehicles. The HOT is commonly used on the French Gazelle helicopter which can carry up to four missiles and has a stabilized roof sight. The BO-105, Tiger and Rooivalk are also able to carry and launch the HOT. A large and cumbersome manpack installation has also been developed

The HOT was initially adopted by France and Germany and was exported to a wide range of European, Middle Eastern and African nations. In modern armies the HOT is gradually being replaced by newer and more capable designs, but it remains in widespread use in many other areas of the world. 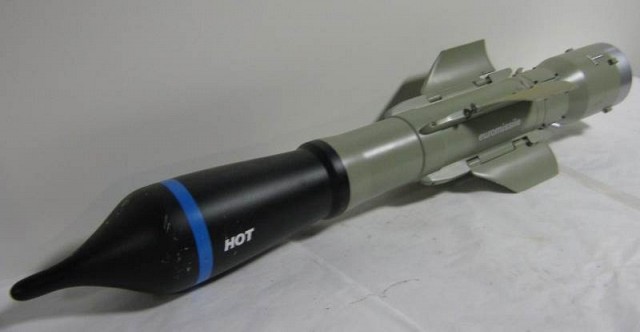 HOT-1
Original HOT missile produced since 1978. Fitted with 136mm diameter shaped charge HEAT warhead.
HOT-2
Improved HOT-1 introduced in 1985. Has a 150mm diameter warhead for increased penetration. The missile body is lighter to compensate for the increased weight.
HOT-2MP
Multi Purpose version of HOT-2 introduced in 1986. Fitted with penetrating blast fragmentation warhead for use against buildings, fortified positions and all vehicles except tanks.
HOT-3
Final version introduced in 1993 and previously called HOT-2T. Has a tandem shaped charge HEAT warhead for much increased penetration and longer guidance wire. K3S
Single rail launcher connected to 20 round magazine with automated reloading. Used on the German Jagdpanzer Jaguar 1.
Mephisto
Unmanned retractable turret with four HOT missiles ready to fire. Used on VAB-VCAC 4x4.
Lancelot
Two man low profile turret with large optical sight, laser range finder and two HOT missiles on each side. The Lancelot 1 is used in the AMX-10P and the Lancelot 3 in the Piranha 8x8.
UTM-800
One man low profile turret with large optical sight and two HOT missiles on each side. Used on VAB 6x6 UTM-800 and VCR/TH.
ATLAS
A single round pedestal mounted HOT missile launcher. It cannot be classified as a manpack launcher since it is much heavier than launchers for other similar size anti-tank missiles. The name ATLAS stands for Affut de Tir Leger Au Sol, which translates to light ground mount. The ATLAS has an optical sight and shield to protect the operator from the missile backblast. Production of the ATLAS system has been limited. 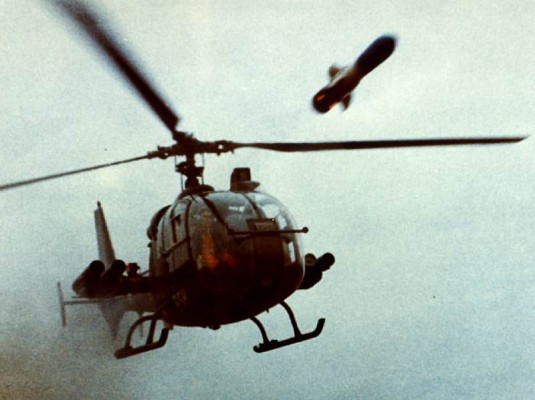 The HOT missile is also widely used as helicopter armament. Early launchers are stub wings with 2 or 3 HOT missiles each. These are often used on the French Gazelle and German BO-105. Later a four round box launcher was introduced for use on the Dauphin and Tiger helicopters.

Target acquisition requires the use of the APX 397 day sight, Viviane day and night sight or the OSIRIS mast-mounted sight as used on the Tiger. 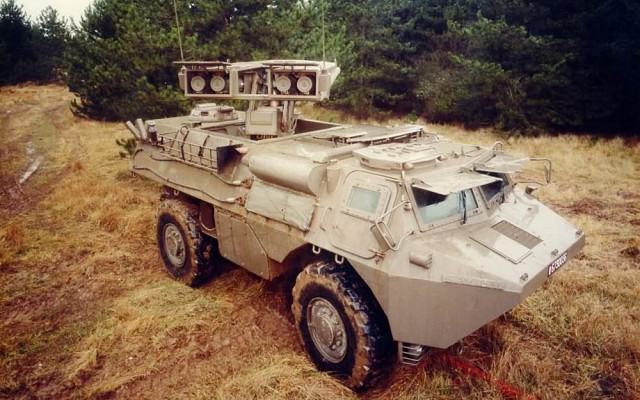 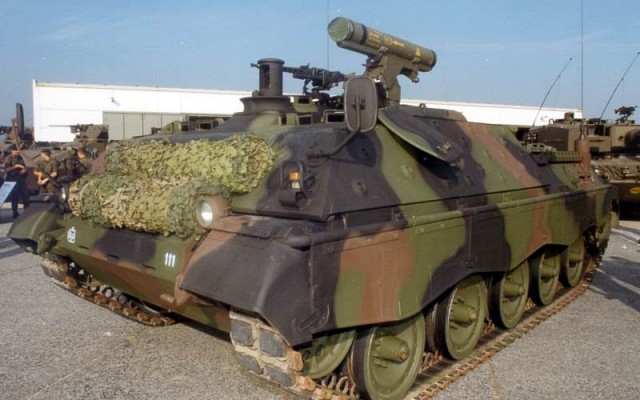 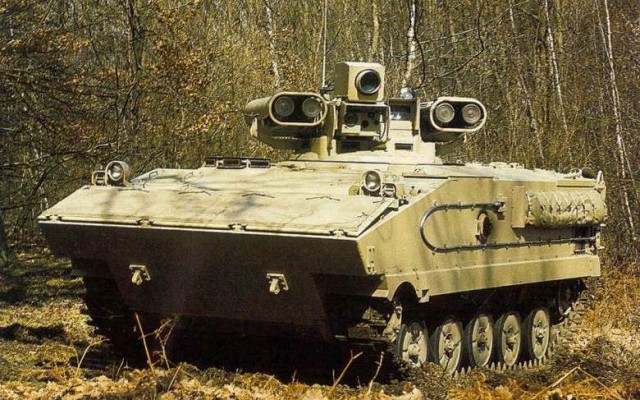 AMX-10P with Lancelot turret as used by Saudi Arabia. 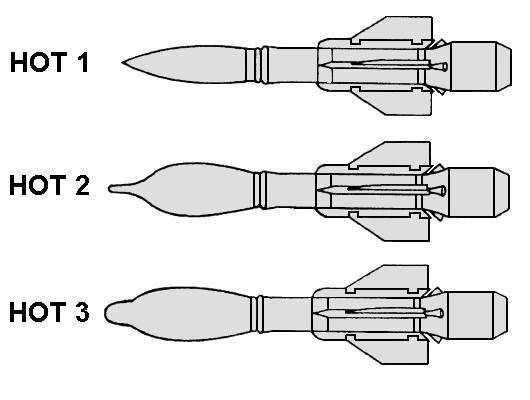 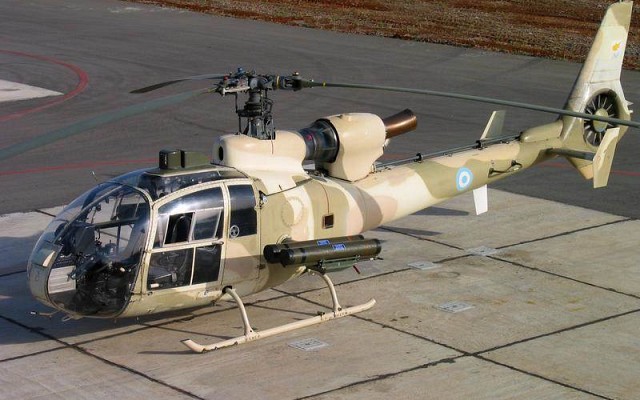 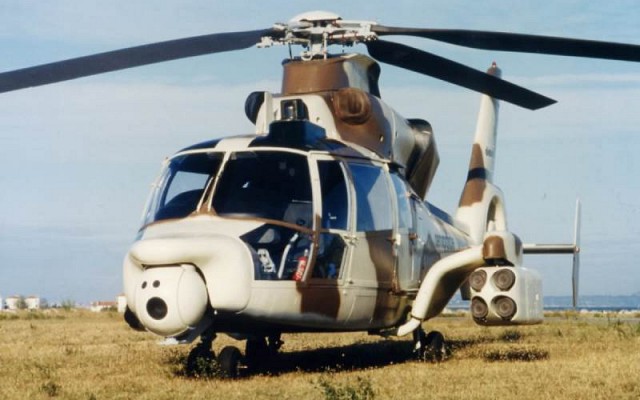 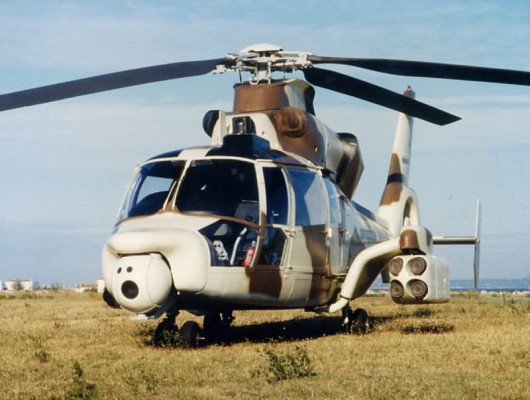 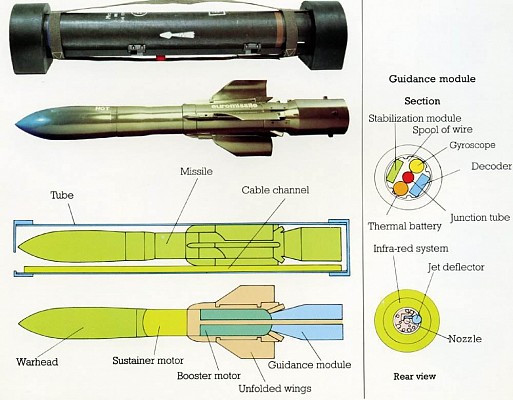 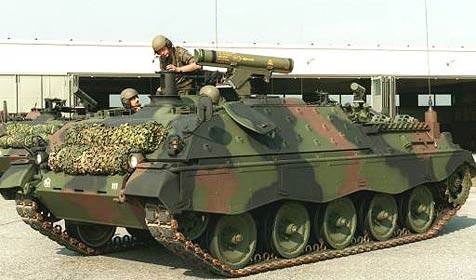 The HOT missile is the primary armament of the German Jagdpanzer Jaguar 1 tank destroyer. This vehicle uses the K3S launcher. The VAB Mephisto is a tank destroyer based on the 4x4 variant of the VAB chassis. It is fitted with a retractable launcher with four HOT anti-tank missiles ready to fire. Tank destoyerer based on the 6x6 variant of the VAB chassis. It is fitted with the unmanned UTM-800 turret with four HOT anti-tank missiles ready to fire. 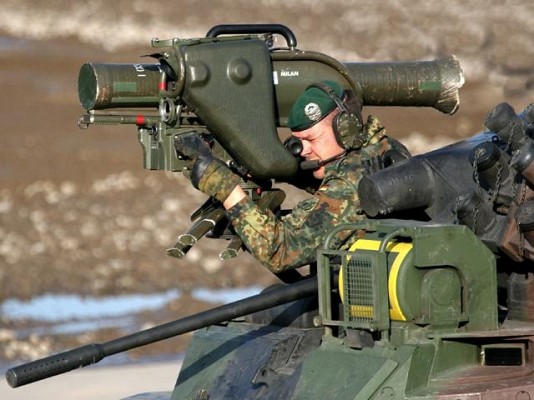 The MILAN was acquired by both France and Germany as a short range manpack alternative alongside the HOT missile. 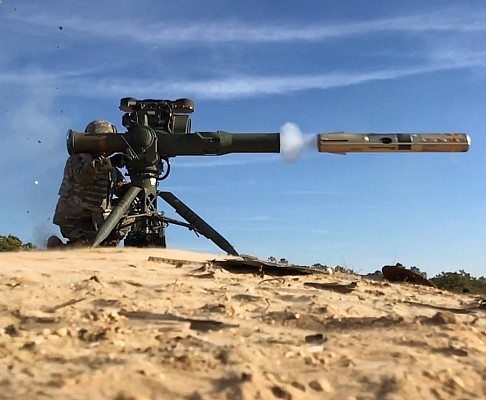 The TOW is an American contemporary wire guided missile which has a similar range and is also wire guided.

The HOT missile has a similar role, design and performance as the contemporary Soviet 9K113 Konkurs (NATO: AT-5 Spandrel) anti-tank missile system, but lacks a similar manpack launcher.