The 9K113 Konkurs is an anti-tank missile of Soviet origin. In the West it is known by the NATO reporting name AT-5 Spandrel. The Konkurs was developed at the same time as the smaller 9K111 Fagot and features a similar design. The Konkurs uses a larger and longer 9M113 missile that is more powerful and has twice the range of the smaller 9M111. The French HOT and US TOW missiles have a roughly similar performance as the Konkurs.

The 9K113 can be considered the larger brother of the 9K111 system. The missile design and guidance are similar and only the size, range and performance differ. The 9M113 missile is transported in and launched from a container. The missile has a booster charge and sustainer rocket motor. Four small vanes at the front and four large wings in the middle provide stability during launch. The 9M113 is wire guided and features SACLOS guidance. The 9P135 lightweight tripod launcher includes an optical sight system and computing mechanism. The same launcher can be used with the smaller and shorter range 9M111 Konkurs missile.

The Konkurs missile can be used to take out any armored vehicle, but the frontal armor of modern tanks may still pose a problem. The penetration is 750 to 800 mm RHA. The improved missile 9M113M missile can also negate the effect of ERA. The maximum range is 4 km and 2.5 km with a night sight. If not obscured by smoke the SACLOS guidance system ensures a good chance to hit the target, even when the target is moving. The SACLOS guidance system does require the operator to track the target from launch until impact.

The Konkurs is a mobile system. The tripod launcher with a missile ready to fire weighs less than 40 kg. When the load is divided over multiple persons the 9K113 may even be transported over long distances by infantry. Since the 9M113 missiles are heavier and often a large night vision sight is employed the Konkurs is less mobile than the 9K111 Fagot. Therefore the manpack launcher is normally transported by vehicle.

The 9P135 manpack launcher has often been pintle mounted on various softskin and armored vehicles. Specialized vehicle launchers have also been developed. The 9P148 is a dedicated tank destroyer based on the BRDM-2 chassis, which has up to five 9M113 missiles ready to fire. The Konkurs system is used on BMP-2 mechanized infantry combat vehicle. Unlike the Malyutka on the earlier BMP-1 this provides anti-tank capability against modern NATO tanks.

The Konkurs was widely used by the USSR and most Eastern European nations during the Cold War. The Konkurs was also widely exported, but not the extent of the earlier 9K11 Malyutka system. The Konkurs remains in production. It is expected to remain in use even though more modern systems such as the Kornet are available. 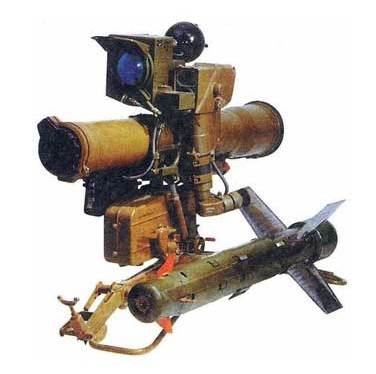 The 9K113 system fires the 9M113 Konkurs missile that is fitted with the 9N131 HEAT warhead. This offers a penetration of 750 to 800mm RHA without explosive reactive armor (ERA).

An improved variant is known as 9M113M Konkurs-M and was introduced to offer better performance against ERA. The improvement consists of a standoff probe with secondary charge for penetrating ERA. Otherwise the level of armor penetration remains similar.

When used with the 9M113 missile additional click-on night vision optics are more common than with the 9M111. The launcher can also be pintle mounted on armored vehicles.

The 9P148 is a tank destroyer based on the BRDM-2 chassis. The 9M113 Konkurs is the main armament, although the 9M111 Fagot can also be used.